Introduction
In the late 1960’s a London-based rabbi, Lionel Blue, and a German Pastor, Winfried Maechler, came together. They met in London where Maechler was pastor of the Dietrich Bonhoeffer Church and their collaboration continued when Maechler moved to the Evangelische Akademie in Berlin. What they brought to the dialogue was a desire to move beyond the repeated re-examination of German guilt about the past treatment of the Jews and to ask instead the question: was there anything the Church could do today for the Jewish people? Against the background of the Middle East conflict, Rabbi Blue suggested that beyond the immediate political entities Israel and the Arab States there were the three great monotheistic religions, Judaism, Christianity and Islam. Surely they had the spiritual resources to offer an alternative to the violence that seemed to be the only option, and perhaps Christians could mediate a dialogue between Jews and Muslims. From this possibility emerged a number of small conferences in Berlin and ultimately the idea of a programme that would involve the future religious leaders of the three faiths during their student days. This resulted in establishing an annual international student conference (generally known as the JCM conference) that took place from its beginning at a small Catholic conference centre, the Hedwig Dransfeld Haus in the town of Bendorf, Germany, thanks to the inspired leadership of the Haus’s director Anneliese Debray. When the Haus was forced to close for financial reasons, the conference moved to Wuppertal with the support of the UEM (United Evangelical Mission/Vereinte Evangelische Mission). 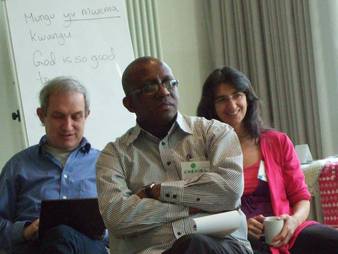 Character of the Conference
Certain policy decisions were made at this early stage that were to affect the subsequent development. The first was to restrict the conference to considering the three religious communities in Europe alone and not to address the Middle East conflict directly but only insofar as it impacted on the local communities.
A second major decision was to obtain participants by personal invitation only rather than advertising widely, and to ensure that whatever took place within the conference was to be treated with the strictest confidence. It was our feeling that dialogue at this level was a matter of personal engagement and people should be able to trust whatever it was that they gained from the experience and not feel that they had been used for some kind of secondary purpose. For this reason there were to be no public declarations at the end of the conference, and at times we had to resist pressures to send out petitions about some current issue in the name of the JCM. Along the same lines we insisted that participants should speak personally as individuals and not as ‘representatives’ of their particular faith or organisation.
Whereas in the early years the programme consisted largely of academic lectures in the usual manner of the time, within a short period we made the decision to restrict the number of formal lectures to three only, one from each of the three faiths. Instead we focused on building the programme around discussion groups. These were carefully crafted to include a balance of members of each of the three faiths, gender equality and, wherever possible, a cultural mix. A key feature of all aspects of the programme was to insist that everything had to be translated into the two languages of the conference, German and English. In practice, a translation into the other language was handed out at the beginning of the public lectures. More important for the actual dialogue process itself was the practice of translating everything that was said in the discussion groups. This put a considerable strain on those charged with the task, and obviously slowed down the discussion, but the long term advantages were significant. Waiting for the translation meant that people had time to consider carefully their response rather than reacting immediately. Moreover, dialogue is as much about learning to listen as it is to presenting your own views, and this translation exercise furthered the acquisition of this important skill.
A later development was to offer more opportunities for informal engagement through workshops that one could choose to attend. These included initially exercises in non-verbal communication, such as meditative dance or art. These expanded later to include shared study of our sacred texts. One afternoon during the week is set aside for an outing to some local place of interest to the three faith communities, which also provides a break from the intensity of the programme. A cabaret by the participants on the final evening reveals any number of unexpected talents.
In the case of the lectures, we invited each of the lecturers to focus on the same issue from the perspective of their religion. The idea was that unique features and differences would emerge naturally from the particular perspectives of the speakers rather than having them attempt to present their views about the ‘other’ religions. In fact speakers were encouraged to speak personally and we have tried to restrict lecturers to people who had attended at least one JCM conference before and had experienced and understood the particular approach. 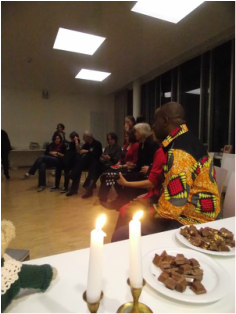 Topics of the Conferences
The topics that we covered over the years included:In recent years we have responded more directly to current concerns and aimed at a younger range of participants with topics like:
Sharing spirituality and knowledge
From the very beginning we made sure that the organising team was made up of equal numbers of people from each of the three faiths, so that the planning and running of the conference could already model the principles we wanted to promote in the programme itself. Though this may seem self-evident, at the time most such programmes were organised by one of the faiths, who invited the others to participate in the programme they designed.
Early discussions addressed the question of how we were to offer the religious services of the three faiths, and whether we should attempt to produce some kind of shared interfaith service. We decided against attempting to do so, and instead each community runs its own services, but with an open invitation for the others to attend and participate to the extent that they felt comfortable. Particularly at the weekend, after a week’s intensive programme, the Friday afternoon Muslim service, followed by the evening and morning Jewish Sabbath services and the Christian Sunday morning service became memorable shared experiences. The one area where we felt we could find common spiritual ground was in silence, and each morning begins with a reading of a text from one of the three communities followed by a silent meditation.
When it was realised that many of the people who came had some kind of information that they wanted to share outside the immediate official programme, we introduced a ‘speakers’ corner’, modeled on London’s Hyde Park, where a number of such talks were presented at the same time, and people could choose whether or not to attend. From time to time introductory Hebrew and Arabic classes have been held.
One of the special features of the conference is the participation of families and the provision of a children’s programme. This means that the conference itself becomes effectively a normal community with the children often easing the personal contacts across religious and cultural boundaries.
Some concluding observations
Despite the growing number of conferences and programmes addressing the relationship between the three faiths, the JCM remains unique in the quality and intensity of the encounter that it provides. To have a week together to explore both personal and community issues in a ‘safe space’ is a luxury few can afford. What it highlights is that at some level dialogue should be seen as an end in itself and not simply a means to achieving some external goal. It may well be that such external issues provide the motive for many to participate, but if the programme is conducted with integrity, and with confidence in its long-term value rather than in immediate results, the effect may be deep and lasting. Generations of leaders of the three faith communities have taken their experience into their respective communities and have created a network of personal friends and available resources that can be called upon when needed, and the likelihood is great that such needs will arise in our fractured world.
Europe is one of the few places where all three faiths meet on equal footing and share similar challenges from an advanced and largely secular society. So a great deal can be achieved in Europe in terms of mutual understanding and common reflection on the attitudes of our respective traditions to one another. That implies also a great responsibility to increase such programmes. If the conference itself is consciously apolitical and self-contained, those who have participated leave with a level of experience of a deep encounter with the ‘other’ that will affect their attitude in many other contexts. The price, however, is often a degree of alienation from the superficial judgments still to be found when one returns to one’s home community. In some ways it is during the ‘re-entry’ that the hardest personal work of dialogue begins.
Many years ago Rabbi Lionel Blue posed the question: ‘We have schools in which we learn how to wage war. Where are the schools in which we learn how to wage peace?’ In its unique way the JCM conference has made a small contribution to answering what is really a question and challenge to us all.
Proudly powered by Weebly